Students use break to de-stress after 1st semester shenanigans 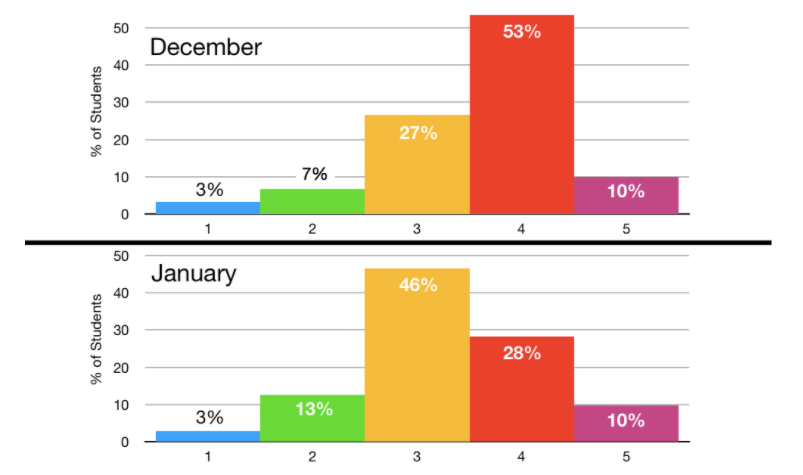 Recent polling from the Student Council Student Issues Committee has shown a significant decrease in students’ stress levels after winter break. Given the decrease in stress, the two most important factors now are the causes of the decrease and how to maintain it through the generally more-stressful second semester.
The histograms above show the stress ratings (1 being low, 5 being high) and the percent of students who reported each rating. The histogram for December is heavily skewed-left, with about 63% of respondents reporting their stress to be 4s and 5s. In contrast, the January histogram is more evenly distributed and only has 38% of students reporting stress levels higher than 3.
According to the students, the greatest cause of this destress was the long winter break and time off from school. December of last year was described as anything but relaxing, with fears about the new omicron variant rising just as fast as the district’s covid cases. Combine the idea of a potential repeat of 2020’s “it’s only two weeks” with the regular stress during finals season, and December became a stress beast for any student to fight. “It felt like a lot of stuff was just piling up. Students’ had a lot on their plate,” said one Sandburg student. Then came winter break. “It was nice to go home, spend some time with my family, relax, and celebrate some holidays together.”
In addition to being destressing on its own, the break also acted as a pseudo-quarantine: data from District 230’s covid dashboard show a steep decline in weekly cases from December to January, with 118 recorded in the last week before the break and only 40 in the first week back after the break. Of course, the beginning of a new semester also meant no pop-quizzes and no finals, contributing to the decrease in stress.
But how should students go about keeping their stress levels low through another possibly challenging semester? “The biggest thing is organization and doing things in advance,” said Sandburg Counselor Mr. Moran. “Keep a good organizational system, plan things out in advance, and don’t wait until the last minute.” Mr. Moran said that students should use either a google doc, google calendar, or a physical planner to keep themselves organized. “Whatever somebody’s comfortable with.”
There’s more that students should do to keep their stress low and their mental health high: “you wanna have a routine so you’re not feeling overwhelmed, and part of that routine has gotta be taking care of yourself, whether that is sleep, exercise, healthy eating,” said Mr. Moran. Following those guidelines could help keep stress low when students’ workloads pile up. He also said that “having someone to talk to is the other part of it … whether that’s friends [or] family members.”