Sandburg Football is Back! 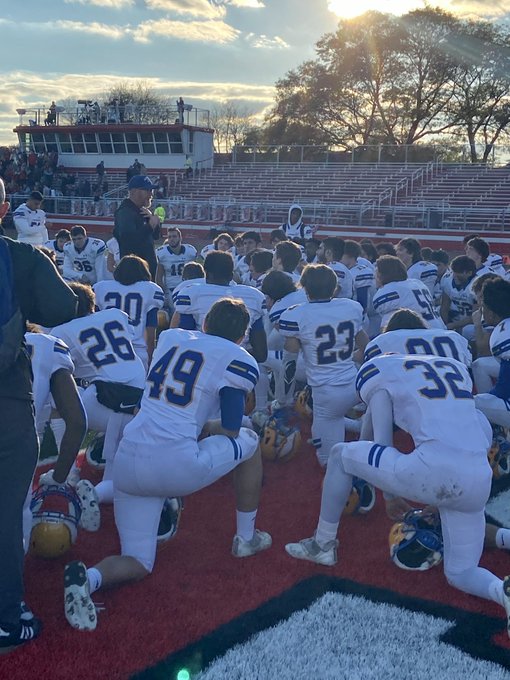 Coach McAllister talking to his team after their playoff loss at Hinsdale Central.

October 31, 2015; the last time Sandburg football played in a IHSA playoff football game. This time last year, no one cared about that date, but as the Eagles finish up their season, many people reminisce about this showdown against Palatine, because now, they can forget that game and remember the Sandburg vs Hinsdale Central showdown that ended the Eagles six year playoff drought.

For 2021 athletic director, Steve Schanz needed to hire a new coach. He turned his attention to the center of Chicago where Troy McAllister was preparing for another year of coaching Phillips High School Football, where he had won two state championships and was in the midst of a historic 11 year run. Ultimately, he decided to walk away from Phillips and move to Orland Park where he would become the head coach of Sandburg.

When Coach McAllister first arrived, there was some talent in the system, but most thought it would be a transition year for Sandburg. With a senior heavy defense, he knew it would be a strong part of the team, but the real question mark was on the offensive side. Junior quarterback CJ Evans was left with the keys to run the offense. “There were plenty of concerns going into the season, but we had faith we would continue to progress to get to the point where we were winning,” Evans said.

He had major help at the running back position with Jake Maziarka becoming the leader on the offensive side of the ball, but outside of him, the rest of the team was filled with question marks. The offensive line was young, and wide receivers like Drew Selle and Walter Davis were unproven. At the start of the season, all of these question marks were looking like they were going to be costly for the Eagles, but as the season progressed, and everyone got more comfortable with Coach McAllister’s system, one game against Lincoln way East would change everything.

Going into the East game, Sandburg had just come off of a though 42-0 loss on homecoming to Lockport. The Eagles traveled to Lincoln Way East to take on a high school football powerhouse. Before the start of this game, Sandburg was 1-4 and were averaging just 6.4 points per game- less than a touchdown. When the game started, Sandburg got off to a hot start but slowly lost the lead. Then, in his first year playing organized football, Walter Davids caught a 75 yard touchdown pass from CJ Evans to put the Eagles up for good. It was the first time Sandburg had beaten Lincoln Way East since 2007- 14 years. This win was no fluke for the Eagles.

After beating East, Sandburg would go on to win three more games in a row, pushing them into the playoffs for the first time in six years. Along with beating East, Sandburg took down Homewood Flossmoor, Lincoln Way Central, and Stagg. This late season surge powered them into the playoffs. They went on to lose to Naperville Central in their first playoff game, but the unexpected success to close the season gives the team high hopes for the start of next season.

“We are super excited for the future of our team and believe we will continue to get better,” linebacker Ryan Noonan said.

They will be star studded on offense with star players CJ Evans and Walter Davis getting one year older. Harrison Meyer will lead the rest of the juniors to try and replace the loss of the seniors who led the defense this past year. Get ready, Sandburg football is back!